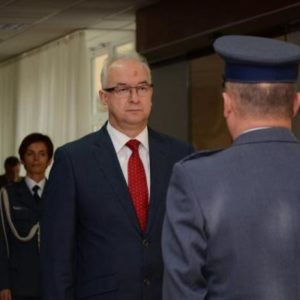 On 24 October 2013, celebrations of the 50th anniversary of the Prison Service Training Center and official handing of the Centers banner, whose main donor was the Polish Platform for Homeland Security, took place in Popowo.

The event was attended by such honorary guests as the General Director of the Prison Service, General Jacek Wlodarski, the Undersecretary of State in the Ministry of Justice, Stanislaw Chmielewski, the office directors of the Central Command of the Prison Service, the directors of custody suites and penal institutions, and the commandants of the Prison Service Staff Training and Improvement Centers. Other participants were representatives of the government, the judiciary, uniformed services, trade unions, prison chaplains, directors of public institutions, and employees of the Center. The Polish Platform for Homeland Security was represented by Professor Emil W. Plywaczewski.

The celebrations started from a solemn mass and a consecration of the banner in the Virgin Marys Birth parish church in Popowo Koscielne. After the event started at the Prison Service Training Center in Popowo, the banner donation act by was read by Professor Emil W. Plywaczewski. The next items on the agenda were driving nails into the banners staff and an entry into the commemorative book. After the official handing of the banner to the Commandant of the Training Center, Professor Emil W. Plywaczewski gave a speech as a representative of all the donor of the banner. What followed was a performance of the artists of the Chamber Opera in Lodz and of the Military Band of the Air Force Command in Lodz. At the end of the event, food and drinks were served.

In her speech, the Commandant of the Center, Captain Dorota Pawlak, emphasized that “the banner is a symbol of freedom and fidelity, but also continuity and endurance” and that its donation “is a great honor, but also an obligation, especially for us, the officers”.