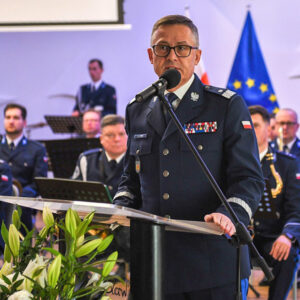 Summary of the SYNERGY project on improving law enforcement cooperation

We would like to inform you that, together with the Provincial Police Headquarters in Łódź and other partners, we attended the conference that concluded the project “Synergy of services as the key to a safe tomorrow”. The meeting took place in a hotel and conference centre near Łódź, Poland.

The project’s primary goal was to improve law enforcement authorities’ efficiency and cooperation in combating cross-border and organized crime, including human trafficking and gender-based crimes. National trainings were held as part of the implementation of these assumptions and organizational units selected by the partners were visited. Among the location visited were the Border Guard Posts in Lesznowola and Warsaw Okęcie, as well as the Remand Center in Warsaw’s Białołęka. There were also foreign trips to Slovenia, Germany, and France, where team members had the opportunity to meet Interpol General Secretariat employees in Lyon.

Representatives from the project partners spoke during the conference, including Brigadier General of the Border Guard Robert Bagan – Commander of the Nadwislański Border Guard Unit, Chief Inspector Waldemar Wołowiec – Provincial Police Commander based in Radom, Major Michał Chrościelewski – Deputy Director of the District Prison Service in Warsaw, Anna Jurkiewicz – Vice-President of the Board of the Itaka Foundation, Center for Missing People, and PPHS’s representative Jakub Horn. The LaStrada Foundation’s materials dealing with the fight against human trafficking and slavery, as well as the exhibition prepared by it, were also displayed.

The most valuable aspect of this project is the collaboration and exchange of information and knowledge between services. This is how to make better use of the available tools and prosecute perpetrators more effectively. Three hundred officers from the Police, Border Guard, and Prison Service will be trained as part of the program. In the first phase, selected participants dealing with human trafficking and gender-based crime will complete all project stages and then transfer this knowledge to their organizational units/departments.

A report will be prepared to summarize the project’s activities. It will investigate human trafficking through international criminal information exchange channels, with a particular emphasis on Interpol, and send it to 50 Polish and foreign police units, as well as the Border Guard.

The Norwegian Financial Mechanism funded Project No. NMF/PA20/027 from the “Home Affairs” Program’s thematic area of international police cooperation and crime prevention from 2014 to 2021. The total cost of the project is EUR 259,927, with Norway funding accounting for 85% of the total cost – EUR 220,938. The remaining costs, totaling EUR 38,989, are covered by the state budget. The project will be implemented from July 2021 to December 2022.