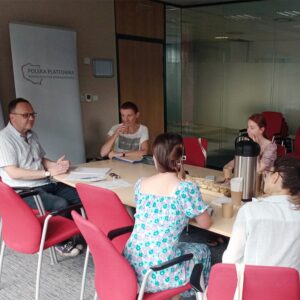 Summary on the peer violence training for children from migrant families

The integration of students from migrant families into the Polish educational system is a relatively new phenomenon. With the importance of this issue in mind, we organised the training “From alienation and polarization to bullying – How is peer violence born? How can we prevent and respond in school?” on June 21st, 2022 in Wroclaw, Poland.

The training was a part of the Social Lab activity, which is dedicated to identifying significant community challenges. The training was designed for non-governmental organization representatives who work with migrant youth in schools. They serve as intercultural assistants, assisting young people from migrant families in assimilating into the Polish educational system. Intercultural assistants working with Ukrainian youth and Roma assistants supporting the integration of Roma students in Wroclaw schools attended the training.

Joanna Wajda, Vice President of the Dom Pokoju Foundation in Wroclaw, led the training. The Foundation operates the mediation emergency service, which assists schools in dealing with the challenges posed by the threat of peer crime. The training covered practical techniques and tools for recognizing attitudes that may lead to violence, identifying student motivation and unmet needs that cause aggression, as well as methods for reacting to and resolving conflicts. The training was based on real-world examples from the mediation emergency service.

The problems associated with the integration of students from migrant families began in 2014, when Russia launched the first stage of its war against Ukraine, and the first major wave of migration arrived in Poland. The phenomenon grew in the years that followed. After February 24, 2022, the influx of Ukrainian migrants became a mass phenomenon. Other countries, including non-European ones, are also affected by migration to Poland. However, Ukrainians are by far the most numerous migrants. Integration of migrants from Ukraine and other countries will be a constant feature of the Polish educational system and local communities.

Therefore, it is relevant to the PARTICIPATION project, which aims to analyze phenomena that may lead to polarization, discrimination, and radicalization, as well as to develop recommendations on how to respond to potential negative trends that may lead to violence.

More information about the project is available here.