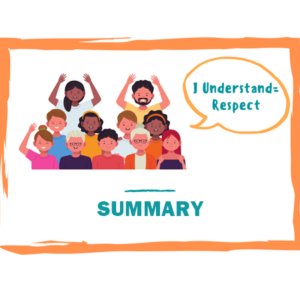 Summary of the “I UNDERSTAND=RESPECT” project

Students (and not only) of the Tadeusz Kosciuszko High School No. 1 in Gorzow Wielkopolski had the opportunity to participate in a series of classes of the pilot educational program to prevent radicalization leading to discrimination and hate speech called “I UNDERSTAND=RESPECT.”

In March 2022, students had the opportunity to meet Kinga Białek – our expert, psychologist and intercultural trainer, who led the “Cultural Diversity Week” and the “Film Discussion Club – The Beauty and Challenges of a Multicultural World.” The activities were aimed at allowing young people to understand the dilemmas of multiculturalism – to learn and explore cultural differences and to pay attention to tolerance of difference, and to learn about the beauty and challenges of the multicultural world through discussion with film. The classes were received with great enthusiasm.

April was also an intensive time in the project, Mirosława Korejba – our expert with experience in police work during which she served as the Plenipotentiary of the Regional Police Commander in Opole for the Protection of Human Rights invited to the classes entitled. “Living Library” by two speakers. The first, an Orthodox priest, talked about the differences between national and ethnic minorities and about helping immigrants. Another guest was an educator, social activist and anti-radicalization expert in the youth community, who talked to young people about the dangers of radicalization. The lectures raised students’ awareness of tolerance, the lack of tolerance and the sources of this behavior.

In April, a workshop on practicing life skills was also conducted by Monika Wiktorowicz-Sosnowska, PhD in social sciences, a sociologist who works with young people at risk of social exclusion. The workshop focused on raising self-esteem among young people, emotions, relationships and stereotype issues and was interactive in nature.

The project also included lectures for parents of the High School No. 1 students. On April 28, a lecture was held by Marzena Kordaczuk-Wąs, PhD in social sciences with a specialization in sociology of security, an author and a substantive coordinator of the project, and Jakub Horn an attorney-at-law, a participant in many projects in the area of security. The topic was “Radicalization – myth or fact?” – the lecture introduced parents to the topic of radicalization – its process, risk factors and recognition of manifestations of radical behavior among young people. The second part of the lecture dealt with the legal aspects and consequences of using hate speech both in real life and on the Internet.

Another activity intended for parents was the lecture “Understanding the Teenager,” during which Dr. Monika Wiktorowicz-Sosnowska presented knowledge about the risky behavior of the teenager (including adolescent rebellion). Adults were able to develop skills for proper communication with a teenager, and learned what role the social context and family ties play in shaping attitudes. They also learned what conflict and risky behavior are, as well as how to handle conflict situations with a teenager. In addition, they learned the difference between conflict and domestic violence and how to prevent it. These classes completed a series of activities for recipients from I LO within the framework of the “I UNDERSTAND=RESPECT” project.

We encourage you to read reports from the classes available on the Facebook profile.

Project financed by Iceland, Liechtenstein and Norway from the EEA Funds under the Active Citizens – Regional Fund Program.