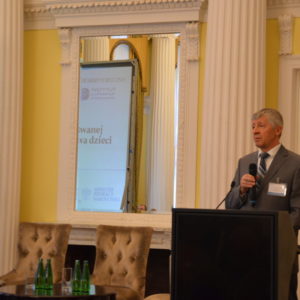 Summary of the PPHS’s conference on integrated prevention

On 6 December, the conference titled “The role of integrated prevention in ensuring the safety of children and young persons” was held in the Primate’s Palace in Warsaw. The Polish Platform for Homeland Security was the lead organizer of the event.

The Honorary Patrons of the conference were: the Ombudsman for Children, the Commissioner for Human Rights, the Minister of Family, Labor, and Social Policy, and the Minister of National Education. The subject-matter partner of the event was the Integrated Prevention Institute. The event was accompanied by a presentation of technologies and solutions developed for agencies, forces, and institutions in charge of security.

After the opening speech given by Prof. Emil W. Plywaczewski, the Head Coordinator of the PPHS, the following Honorary Guests gave their speeches:

After the speeches given by the Honorary Guests, Rashel Talukder, the Managing Director of the PPHS, presented the current projects conducted by the Polish Platform for Homeland Security. Afterward, a speech was given by judge Anna Maria Wesolowska who familiarized the attendees of the conference with the topic of integrated prevention. Later, their actions were presented by representatives of the Ministry of Justice (judge Krzysztof Jerzy Piaseczny, Manager of the Team for Legal Education of Children and Youth) and of the Police (junior insp. Dr. Marzena Kordaczuk-Was, Prevention Bureau of the National Police Headquarters). The next presenter, Dr. Szymon Grzelak, President of the Integrated Prevention Institute, discussed the results of studies related to integrated prevention.

An important part of the conference was a discussion of integrated prevention in Poland, its current status, and the recommended directions. The discussion conducted by Bartosz Pilitowski, President of the Court Watch Poland Foundation, was attended by judge Anna Maria Wesolowska, Dr. Szymon Grzelak, as well as Dr. Agnieszka Barczykowska and Dr. Katarzyna Pawelek from the Faculty of Education Studies of the Adam Mickiewicz University in Poznan.

During the third, and last, part of the conference, presentations were given by representatives of the educational system, local and regional government, the Police, and schools, who discussed practical examples of prevention activities taken in all parts of Poland.

It should be emphasized that the conference was attended by over 200 persons from all over Poland, among others by representatives of state and local and regional government institutions, uniformed services, the judiciary, non-governmental organizations, schools, school inspector’s offices, academic centers, and other institutions interested in the topics discussed during the conference. The event stimulated discussions on the role and direction of development of integrated prevention in Poland, and the conclusions drawn during the conference will facilitate further work on the topics discussed there.