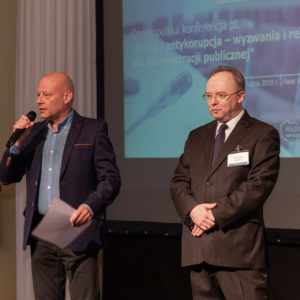 Summary of the conference: “Ethics and anti-corruption – challenges and recommendations for public administration”

On the occasion of the International Anti-Corruption Day, on December 10, 2018, a nationwide conference entitled: “Ethics and anti-corruption – challenges and recommendations for public administration” was held in the Primate’s Palace in Warsaw. The event was organized by the Polish Platform for Homeland Security (PPHS) and the Anti-corruption Academy.

The main objective of the conference was to discuss the effectiveness of anti-corruption solutions and new ethical programs in public administration, including programs developed by the Prime Minister’s Office.

After the opening speech given by Prof. Arkadiusz Letkiewicz, the Project Coordinator for the PPHS and Slawomir Sniezko, the President of the Board of the Anti-corruption Academy, the following Honorary Guests gave their speeches:

Among the honorary guests of the conference were also:

The conference consisted of three thematic sessions. During the first of them, the status of implementation of the Governmental Anti-Corruption Program for 2018-2020 in Poland, solutions in the field of counteracting corruption and financial fraud in the Public Procurement Law and the role of Whistleblowers in Poland and abroad were presented.

The second thematic session presents practical aspects from the implementation of the ISO 37001 Anti-bribery management systems. In addition, the benefits of implementing the code of ethics in the institutions were presented. The last part of the meeting was dedicated to the role of the police in preventing and detecting corruption, implementing new standards in the field of ethics and honesty in the Civil Service, legal and organizational solutions on counteracting corruption in the National Revenue Administration and funding opportunities for anti-corruption projects from the “Internal Affairs” Program of the Norway Funds for 2014-2021.

Guests of the conference were representatives of following institutions: the Ministry of Finance, the Ministry of Interior and Administration, the National Police Headquarters, the Central Anti-Corruption Bureau, the Public Procurement Office, the Marshal’s Office of the Mazowieckie Voivodeship, the Polish Committee for Standardization, the Stefan Batory Foundation, the “Żelazna” Medical Center and the Anti-corruption Academy.

Over 200 people participated in the event. In particular, they were representatives of public institutions from the health, energy, sport, education, security, judiciary and financial sectors, as well as other representatives of the local government and subordinated units. The conference was also attended by representatives of non-governmental organizations and centers conducting training in the field of ethics and anti-corruption.