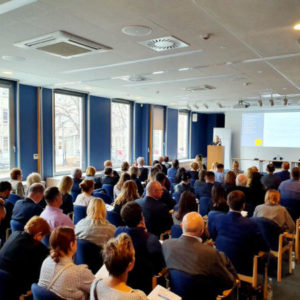 The second edition of the nationwide conference entitled “Effective prevention of corruption and other undesirable phenomena in public administration” took place on the occasion of the International Anti-Corruption Day, on 9 December 2019, at the headquarters of the Stefan Batory Foundation in Warsaw. The event was organized by the Polish Platform for Homeland Security and the Anti-Corruption Academy.

During the conference, we could listen to speeches given by:

The aim of the conference was to exchange views and experiences on building effective tools for counteracting both corruption and other abuses in public institutions.

During the first session, the topic of ethics in public administration was presented as a basis for counteracting mobbing. Afterwards, the participants discussed the risk of corruption slander against administration employees. In addition, the possibilities of obtaining external funds for the implementation of anti-corruption projects in public institutions were presented, as well as the topic of culture of integrity in the civil service.

In the second part of the conference practical workshops took place, during which experts presented how to build and implement effective tools for preventing corruption and fraud.

Nearly 100 people participated in the event. In particular, there were representatives of central and public institutions and ministries. We thank all of them for their presence during the second national anti-corruption conference and we encourage to take part in further meetings organized and co-organized by PPHS.

Presentations made available by the speakers are available here (materials in Polish).