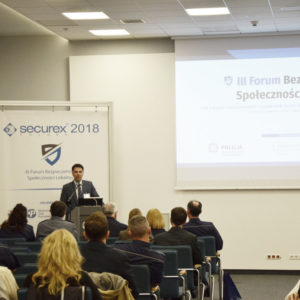 On 23 April 2018, as a part of the SECUREX trade fair, the 3rd Local Communities Security Forum was held in Poznan. During this year’s Forum, a debate was held on “The role of uniformed police classes in the formation of civic attitudes of young persons in the area of security”.

On behalf of the host of the Poznan International Fair, the 3rd Forum was opened by Elżbieta Roeske, the Vice-President of the Management Board of the Poznan International Fair, who indicated that cooperation in the area of security with central, regional, and local government is one of the key objectives of the Fair, whose achievement is also facilitated by the co-organization of the Forum. In his inauguration speech, the Provincial Police Commander in Poznan, insp. Piotr Maka emphasized that the Wielkopolskie Province’s framework program for secondary school police classes makes is possible not only for each class to take the same classes on broadly defined security, but also to organize classes, especially training workshops and competence training that strengthen bonds within groups and teach participants teamwork. Rashel Talukder, the Managing Director of the Polish Platform for Homeland Security, indicated that secondary school police classes not only provide to selected students the opportunity to gain knowledge in such areas as law and prevention, but also form large groups of persons active in various aspects of prevention and participation in voluntary activities.

The opening of the Forum was attended by Krzysztof Blaszczyk, the Deputy School Superintendent in Poznan, who, in his speech, indicated the importance of the initiative, which started over 10 years ago in Wielkopolska, to form secondary school police classes and to initiate, in this area, the cooperation of school principals, school coordinators, and police officers in charge of prevention activities.

From presentations given by numerous representatives of schools, the participants learned about experiences related to development of police classes.

In the second part of the Forum, a representative of the Polish Platform for Homeland Security held a debate attended by Dr. Agnieszka Barczykowska from the Department of Rehabilitation of the Adam Mickiewicz University in Poznan, Dr. Anna Czarnecka – the Coordinator of the Framework Program for police classes at the Province Police Headquarters in Poznan, Maria Bychawska – the Principal of the Group of Technical Schools in Srem, and Dr. Jakub Jasiczak from the Fort Foundation.

In the course of the debate, the participants emphasized the role of police classes which address the needs of young persons and for many years have attracted a lot of interests among students. It was concluded that the curricula must constantly evolve in accordance with the trends in the area of security, legal changes, and organizational and technical solutions. The participants of the debate clearly indicated that this is possible only when school principals and students, in cooperation with police officers, are fully engaged in educational-organizational activities. This is how many schools implement their curricula and cooperate and the result is several thousand graduates of police classes in the Wielkopolska region and more students that are working on joining that group.

During the debate, the participant discussed the future of police classes, including the possibility to use the potential of the students to strengthen the security of the country. As its participants stated, the potential in this area is high and examples of good practices are evident during numerous events or voluntary projects in which young people regularly participate.

At the end of the Forum, the Provincial Police Commander in Poznan, insp. Piotr Maka, presented awards to over ten persons for their high commitment. They included school principals, teachers, police coordinators, and representatives of entities that co-organize theoretical and practical activities. In his conclusion, he emphasized that all submitted ideas would undergo constructive analysis and implemented by the Province Police Headquarters in Poznan; an example of such an idea is one submitted four years ago, during a similar conference, concerning a start of a competence training program.

The Forum is a regular event held by the Provincial Police Headquarters in Poznan, the Polish Platform for Homeland Security, and the International Trade Fair. Due to the topic of the Forum, its third edition was organized as a part of the interdisciplinary project titled “Observatory of threats to young people” initiated in 2015 with the aim to undertake complex activities in the area of monitoring, detection, and countering of threats to children and young people. A detailed presentation about the actions undertaken as a part of the Observatory was given by kom. Michal Krolikowski from the Prevention Department of the Provincial Police Headquarters in Poznan.

The meeting was attended by representatives of local and regional government, uniformed services, public administration agencies, scientific and academic institutions, and non-governmental organizations. This year’s Forum was attended by a large group of students, who were among the addressees of the meeting.