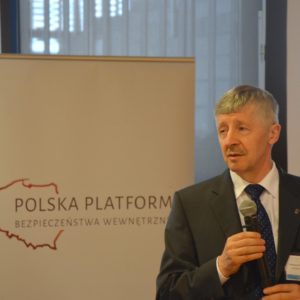 “Research and innovations in the area of security – exchange of international experiences” – this was the title of the conference organized by the Polish Platform for Homeland Security and the Polish National Contact Point for Research Programmes of the European Union, held on 11-12 May 2016 at the Conference Center of the National Stadium in Warsaw.

The media patronage of the conference was exercised by the Rzeczpospolita newspaper and the Policja 997 weekly magazine.

The accompanying event of the conference was the Information Day in the area “Secure Societies” area of the Horizon 2020 program, held on 10 May 2016, with the support of representatives of the European Commission and the Research Executive Agency (REA).

The main objective of the conference was to identify and develop methods of optimum cooperation between representatives of the science, business, and agencies and institutions responsible for public security, in the framework of research and development works.

During the Information Day (10 May 2016), detailed information about the current call in the area of security of the Horizon 2020 Programme was presented by the following persons:

The first day of the Conference started with presentations by the Honorary Guests:

Afterwards, new possibilities were presented of European Union’s financing of activities of agencies and state institutions aimed to implement results of R&D (POV, PCP, and PPI mechanisms). Presentations in this part were given by:

During the session that followed, representatives of the Police from the United Kingdom and the Netherlands shared their experiences in the implementation of R&D projects in the area of security:

The models of financing of research in the area of security in EU countries, including the issue of intellectual property rights related to results of R&D works, were presented by:

After a short break, a presentation about the Bank Cybersecurity Center was given by Dr Mieczyslaw Groszek, Vice-President of the Polish Bank Association.

Also, a cooperation agreement between the PPBW and ENLETS (European Network of Law Enforcement Technology Services) was signed during the first day of the conference.

The guests of the conference were welcomed by Prof. Emil W. Plywaczewski, the Head Coordinator of the Polish Platform for Homeland Security, and Sebastian Serwiak, Deputy Director of the National Contact Point, who summed up the first two days of the conference.

After the session started, the Honorary Guests give their presentations:

Afterwards, Prof. Lech Paprzycki, President of the Supreme Court, Head of the Criminal Chamber, made an introduction to the discussion that focused on finding the answer to the question of whether it is possible to find a balance between the right to privacy and the need for surveillance by uniformed and secret services.

The participants in the discussion were:

The discussion was addressed by the Honorary Guest of the Conference, National Public Prosecutor Bogdan Swieczkowski, First Deputy Prosecutor General.

The discussion ended with the presentation given by representatives of TELESTE VIDEO NETWORKS and SATLAN, which focused on use of video monitoring to detect and fight crime and terrorism.

After the break, during the second part of the meeting, the results of selected R&D projects in the area of security, financed mostly by the National Center for Research and Development, were presented. Further presentations focused on cybersecurity and protection of national borders:

The conference and the Information Day were attended by representatives of the Polish government and state administration, Polish and European agencies and institutions responsible for security, judges and prosecutors, representatives of public and non-public universities, research and development entities, non-governmental organizations, and businessmen. A total of over 300 persons attended the events.

The conference was attended by visitors from the following countries:

The honorary guests of the conference were:

The tasks given to the Polish Platform for Homeland Security as a result of the discussion held during the conference:

Presentations from the conference can be found here.

Agenda of the conference is available here.