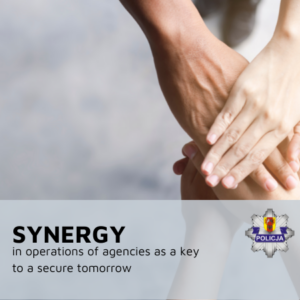 The project “Synergy in operations of agencies as a key to a secure tomorrow” aims to improve the efficiency of operations and cooperation of law enforcement agencies in combating human trafficking and gender-based violence.

In addition, the project’s team organised online workshops on specialised English law and police vocabulary. These were conducted from the 9th to the 15th of December 2021, for three different groups at different levels. The participants’ knowledge was verified both at the beginning and at the end of the course to be able to assess their progress. The whole training cycle lasted 6 days in total and included the organisation of 3 workshops.

During the courses conducted on 23 February and 9 March 2022 on the legal grounds and legality of employment of foreigners, the participating officers were familiarised with the legislative process of employing foreigners in the territory of the Republic of Poland. The topic turned out to be particularly relevant and useful considering the current migration flows due to the war in Ukraine.

Other important aspects were up for discussion during the workshops on the 1st, 2nd and 29th of March on empathic communication with crime victims, the psychological profile of victims of trafficking and psychopathological mechanisms influencing the reactions of victims. Each training comprised approximately 100 officers representing the Polish Police, Border Guard and Prison Service.

The Polish Platform for Homeland Security is a partner of the project “Synergy in operations of agencies as a key to a secure tomorrow” which is financed by the Home Affairs Program implemented under the 2014-2021 Norwegian Mechanism.