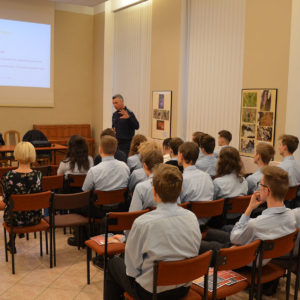 Safety day in the Technical Communication School in Poznan

On 23 November 2018 in the Technical Communication School them. Hipolit Cegielski in Poznan (ZSK) took place the Safety Day on “Designer drugs destroy lives”. The event was organized by the Polish Platform for Homeland Security and the Polish Police Regional Headquarters in Poznan in cooperation with the Probation Officers Team of the District Court in Poznan.

Over 100 pupils of second grade the ZSK participated in an educational and preventive meeting during which two police officers of the Prevention Department of the Polish Police Regional Headquarters in Poznan, expert of the Probation Officers Team in Poznan and representative of the PPHS had their speeches.

During the meeting, students learned what the designer drugs are and what are the consequences of their use.One of the lessons, which was in the form of multimedia, the students listened to the opinions of many experts specializing in this area. The question of the responsibility of minors before a court in the context of psychoactive drugs was also raised along with the clarification of the role of probation officer and its supervision over the discussed cases. In a short speech preventive activities of the PPHS, including work on the program “Safety School of PPHS” were also presented.

The project “Designer drugs destroy lives” was created in 2015 and is addressed to youth to protect them from effects of taking drugs. The activities are carried out through organizing meetings with young people, legal guardians and representatives of pedagogical environments or involving young people in peer prevention.

Taking into account the security of young people, both in terms of psychoactive drugs and others threats, Safety Days is an initiative that is regularly organized within “Threats Observatory for young people” in the Wielkopolska Region.