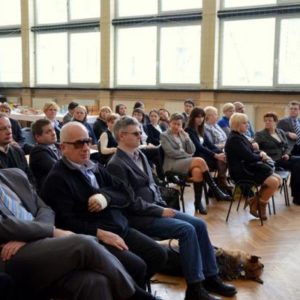 The project, performed in the framework of the Polish Platform for Homeland Security and led by Professor Ewa Guzik-Makaruk from the University of Bialystok, comprises two parts: a legal one and a technological one.

The legal part, consisting of a criminal-law, criminological, and victimological area, is to be performed by the Law Faculty of the University of Bialystok. This part of the project will involve a broad analysis of the current Polish and international laws pertaining to the safety of blind and visually impaired persons (to include recommendations regarding laws to be adopted). Also, a list of hazards present in road traffic and a model of an urban map of hazards to blind and visually impaired persons participating in traffic in urban areas will be elaborated. The empirical research will be conducted among others on the basis of experiences of police officers.

The activities related to the technological part, coordinated by Professor Andrzej Dziech from the AGH University of Science and Technology, will lead to elaboration of a prototype of an intelligent mobile device that will facilitate determination of a person’s location and supporting blind and visually impaired persons participating in traffic in urban areas. Of particular importance is the commencement of the works intended to develop innovative technological tools for automatic analysis of the geometry of the surroundings using state-of-the-art miniature cameras to be installed, among others, in glasses.

Another important participant of the meeting was Professor Jerzy Wiciek, the Deputy Dean of the Faculty of Mechanical Engineering and Robotics of the AGH University of Science and Technology in Cracow, who, for many years, has worked to develop new technologies for the blind.

Professor Ewa M. Guzik-Makaruk (University of Bialystok), Professor Andrzej Dziech (AGH University of Science and Technology), Mr. Rashel Talukder (PPBW), Mrs. Katarzyna Heba (PPBW), and Mr. Charlampowicz (Gdansk University) gave presentations during the meeting. Of note is the fact that the persons involved in the project include over ten blind persons who are participating in both the criminal-law part and the technological scope.

The project has attracted a lot of interest in the academic world and among the future beneficiaries, as demonstrated by the heated debate that took place after the presentations.