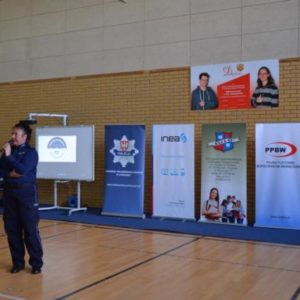 Below are photographs from the education-prevention event titled “Cyber-day at the Group of Grammar Schools no. 2 in Poznan”, held on 27 April 2015 at the GGS in Poznan.

During the event, the winners of the contest titled “Say NO to cyber-violence. Cyber-threats in the magnifying glass” for the best short film received awards:

The 1st place was won by the team of Aleksandra Olszewska, Karolina Olejniczak, and Wiktoria Szala from class 2E
See the film, click here.

The 2nd place was won by Filip Spychala from class 2D
See the film, click here.

The 3rd place was won by Julia Gandecka from class 2E
See the film, click here.

The awards were funded by INEA and the Polish Theater in Poznan.

The event was organized by the Polish Platform for Homeland Security, the Provincial Police Headquarters in Poznan, and the Charles de Gaulle Group of Grammar Schools no. 2 in Poznan. A report by the WTK television from the event, click here.