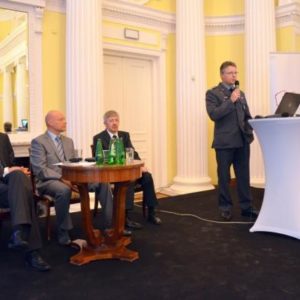 On 17 June 2015, in the Primate’s Palace in Warsaw, the Polish Platform for Homeland organized a conference titled “Research and development projects in the area of internal security – new challenges, new prospects. Presentation of the PPHS’s strategy for the years 2015-2020”.

The main objective of the Conference was to present the Strategy of the Polish Platform for Homeland Security for the years 2015-2020, which was developed in cooperation with agencies and institutions responsible for internal security and legal order in Poland. The new mode of operation of the PPHS is a response to the changes that have been observed and the current research and development environment in the field of internal security.

The Conference was opened by the Main Coordinator of the PPHS, Professor Emil W. Plywaczewski.

The Conference was divided into two parts.

Presentation, in accordance with the standard practice, of the following projects in the area of security and defense, financed by the National Centre for Research and Development. This part was moderated by Rashel Talukder, the Secretary of the Polish Platform for Homeland Security.

In the second, official part of the Conference, conducted by the Main Coordinator of the PPHS Prof. Emil W. Plywaczewski and the Project Coordinator Prof. Arkadiusz Letkiewicz, the Strategy of the Polish Platform for Homeland Security for the years 2015-2020 and the Advisory Board of the PPHS were presented.

It must be emphasized that the outcomes of the works conducted in the framework of the PPHS fully met the expectations of the institutions for which the Platform was established and that the Strategy was elaborated in cooperation with agencies and institutions responsible for national security and the security of citizen. The following institutions were invited to work on the Strategy: Internal Security Agency, National Security Bureau, Government Protection Bureau, Central Anti-Corruption Bureau, State Fire Service, Police, Government Security Center, Customs Service, Prison Service, Border Guard, and Military Police.

The Conference was attended by: