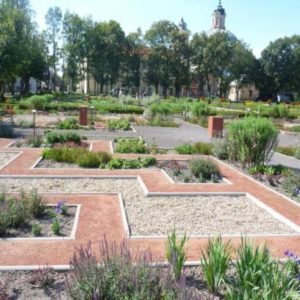 Opening of the Spatial Orientation Park in Owinska

The facility, first in Poland and most likely the only one in Europe, created with the involvement of the Polish Platform for Homeland Security, will benefit blind and visually impaired persons in their learning of spatial orientation and participation in traffic, to include in urban areas.

The Park is equipped with facilities that imitate real road traffic, architectural models of real places, and special teaching instruments (audio toys, balances, swings, obstacle courses, etc.). Preparation of blind persons for life among people who are not visually impaired will be based on simulation of various events and situations. Children will learn to walk over curbs and move over different types of surfaces. Another feature of the park is the so-called “garden of sensory experiences” – a place where all the senses of the trainees will be engaged. Besides stimulating the development of blind persons, the garden will also be used to promote integration as the place for classes for healthy pupils from regular schools.

The Park will be used not only the pupils of the Center, but also by the residents of the Poznan district and by tourists. Children and adolescents will enjoy a particularly large number of attractions at the Park. The design of the facility includes roofed places for bonfires, playhouses, and lit pathways; there are numerous educational devices and equipment for playing outdoors.

The Spatial Orientation Park is not the only innovative project performed at the Center in Owinska. Poland’s first typhloacoustic laboratory is located at the Center. The laboratory is a soundproof room with modern equipment enabling the pupils to learn the sounds of a city. Since December of last year, the Center has had a unique permanent typhlological exhibition with a collection of devices used by blind persons over the last several centuries, to include maps, Braille tablets, and touch graphics.

The official opening of the Park ended with a concert of the Raz, Dwa, Trzy band.

More information about the Park can be found here.