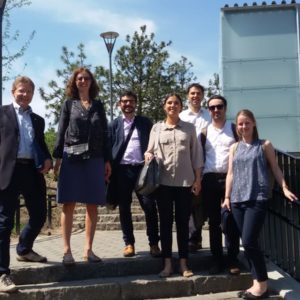 On 29-30 May 2018, representatives of the Polish Platform for Homeland Security participated in the exchange mission in Copenhagen, organized within international project MINDb4ACT.

In the visit, which was led by the DIIS (Danish Institute for International Studies), took part representatives of the Elcano Royal Institute (Spain) and the Italian Ministry of Justice.

The aim of the visit was to understand Danish approach to countering and preventing extremism and radicalization, present how in the practice and with the participation of which institutions the system of monitoring, detection and prevention of radicalization and extremism (CVE) works in Denmark.

The exchange mission consisted of 5 meetings in government and local government institutions.

On 29 May 2018, took place two meetings. During the first day at the DIIS’s office the delegation met with representative of the Danish Security and Intelligence Service (PET). It is the national institution, whose activity is mainly preventive and is responsible for identifying, preventing and tackle threats, including extremism and radicalization. The next meeting was held with Kasper Fisker, the Chief of Staff and Head of Office for Crime Prevention (DKE) of Municipality of Albertslund, CVE-coordinator at the Police district of Albertslund.

On the second day, 30 May 2018, the representatives of 3 institutions presented their experience in the implementation of the Danish CVE strategy: Ann-Sophie Hemmingsen, Chief Advisor at the Danish Centre for Prevention of Extremism in Ministry of Integration and Social Affairs, Morten Hjᴓrnholm i Rekha Grue – prison officers involved in CVE programs in the Danish Prison and Probation Service and Muhammad Heed, the CVE Coordinator of the CVE in the Municipality of Copenhagen.

We encourage to read the report from 2015 prepared by the DIIS “The Danish Approach to Countering and Preventing Extremism and Radicalization”. The report in English is available here.