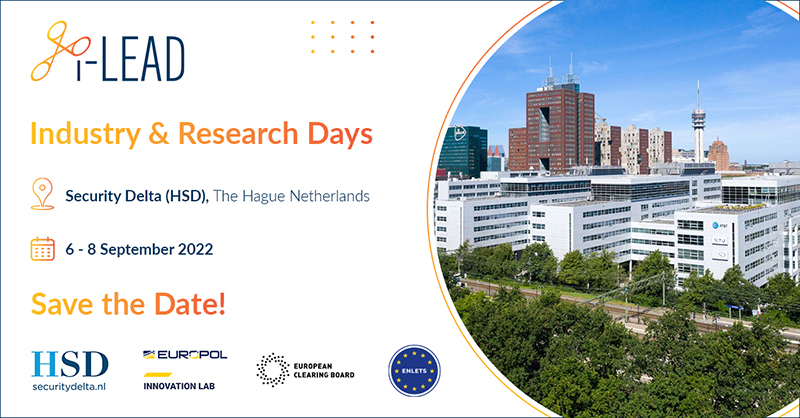 Register to attend as a Practitioner here.

The i-LEAD project held this year’s Industry and Research Days taking place from the 6th to the 8th of September at the HSD Campus in The Hague, Netherlands.

This event brought together industry professionals, researchers, academics and practitioners and showcased innovation and technology that serves to satisfy LEAs needs promoting resilience in the work of front-line officers and practitioners across Europe.

The Industry & Research Days organized together with Europol, ENLETS, the European Clearing Board and Security Delta (HSD), created an environment conducive to discussions about innovative technology solutions to assist with the known needs and gaps identified during the practitioner workshops.

This page highlights the companies whose technology or research solutions were presented.

For more information, or to access the presentations as an LEA practitioner, reach out to frontoffice@enlets.eu.

Mona is an analysis platform developed for the semantic analysis of mobile communication data across communication channels (eg WhatsApp) and modalities (eg audio, image). This enables investigators to comprehensively understand the content of mobile communication, despite its heterogeneity and incompleteness, in order to be able to recognize evidentiary information more quickly in the mass of irrelevant data and to avoid misinterpretations.

Tactilon® Agnet is all about secure group collaboration on mobile broadband networks. It brings professional communications to your smart devices and offers you the possibility to bring your radio and smart device users to same groups.It meets the needs of public safety organizations. Staff and data necessary to an operation can be easily and securely reached, even when using different devices and technologies.

Vicomtech is an Applied Research & Technology Organization specialized in Artificial Intelligence, Visual Computing & Advanced Interaction Technologies. We foster the Generation of knowledge and the development of advanced solutions in a number of sectors.

Secura Defense and Safety is a department of Secura BV, a Dutch cybersecurity expert company with over 20 years of experience in offensive cybersecurity. Together with the Dutch boutique vulnerability research company Midnight Blue, we develop the Automotive Control Platform solution for modern-day vehicle mitigation.

The Automotive Control Platform (ACP) aims to make the technically complicated process of remotely compromising a vehicle accessible to law enforcement operators in the field. Temporary remote control over a target vehicle can be used for various vehicle mitigation tasks, eg limiting the speed of the target vehicle. Other possibilities include, but are not limited to recording the car’s internal microphone, or tracking its GPS location.

This technology is designed to be used during any police car to suspect car interaction. It can be used from speeds of 25kmph upto 120kmph over a distance of 10m. this allows operation of the darts on city roads to highways in most weather conditions (we are working on dart adhesion in wet weather).

Darts with GPS trackers are installed in the grill of police vehicles. During situations where a suspicious vehicle is being followed, or a chase has been initiated, the officer can launch these darts (over 10m and at speeds upto 120kmph). These darts stick to the suspect vehicle in front, and send back its (and by extension the suspect vehicles) GPS location at 1Hertz. This allows officers to actively track the location of the suspect.

Digital data is becoming increasingly important for investigating suspects and as evidence in criminal cases. With the number of new devices, apps, and channels growing rapidly, the amount of data grows exponentially. Investigators are challenged with quickly finding relevant information. Hansken is an open digital forensic platform that can be used to transform the way digital evidence is being stored, processed and investigated.

U-Query uses the latest deep learning research results to build a smart index of the videos. The index itself is about 1% of the compressed video yet it contains all relevant information that can be interesting in video analysis. Once the index is built the user can ask a wide variety of queries including natural language queries.

X-Surveillance gives the user more insights into the suspect’s whereabouts and can expose an entire criminal network. This is based on detecting (hidden, visible, correlated) smart wearables, phones, trackers and vehicles, once detected the user can access the detected smart device. We also work on the future by identifying and positioning unrecognizable suspects without the use of facial
recognition, using predictive and collective insights. “

Using X-SENSOR’s correlation and intelligence profiling, access can still be granted to a criminal’s daily whereabouts. All this with a real-time remote intelligent dashboard.

The BLKA is a pioneer in the digital collection and analysis of images of unknown suspects. With the expansion of the use of facial recognition, the BLKA wanted to open up additional police image sources as the third pillar of the recognition service, aside from fingerprint and DNA-Database, to automatically identify suspects from videos by means of facial recognition, and to build up a photo collection (database) for unidentified suspects, in which retrograde identifications for old cases (cold cases) are possible.

The Dark Web Monitor is an OSINT repository web application in which over 1.6 million domains are actively monitored for changes in content. The monitor provides insights in trends and allows for in-depth evidence gathering by allowing to go all the way to the source HTML. Our scalable system extracts entities like cryptocurrency addresses, email addresses, etc. to allow for easy filtering and sorting for relevance by the users. 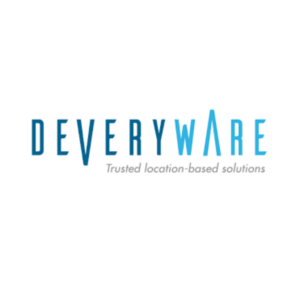 Deveryware is the Expert in Technologies and Investigation Services for Homeland Security and presents the solution “Interlingual Comprehension independent from the Language / Detection of Imminent Threats: Transformation into Structured Actionnable Data”.

This technology allows to catch the meaning of your documents. This multilingual solution allows a text or spoken content transcription comprehension in their original language with results in your own language. It can identify events and named entities in time and space as well as their functions, actions and means automatically according to users needs in multilingual textual contents. It is able to collect past, current and future events. 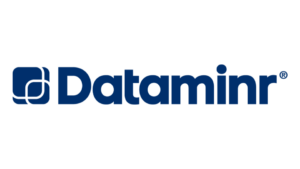 INSPECTr is a H2020-EU funded project. As part of the INSPECTr project, the Judicial Police of the National Gendarmerie (PJGN) is working on the development of a AI toolkit that groups various services such as NLP techniques like Named Entity Recognition and Stylometry, knowledge discovery, crime forecasting, case profiling.

The Natural Language Processing Annotator is a tool designed to perform different NLP tasks including Named Entity Recognition and Semantic Relation Extraction. It supports 104 languages ​​and is adapted to the Law Enforcement domain. It serves in highlighting relevant information from unstructured media by
transforming plain text into knowledge graphs. It is deployed at Gendarmerie Nationale and has also been shared with EUROPOL.

2. Stylometers – This tool is useful when using large amounts of data that is impossible to analyse using traditional methods like web forums (twitter & darknet markets) with millions of posts everyday. In darknet marketplaces for example, a user can create multiple accounts to sell different products. It could be useful, during an investigation, to link both accounts to know that the suspect doesn’t only sell drugs but is also involved in child exploitation.

LOCARD provides Law Enforcement Agencies an innovative platform to manage digital evidence continuity of evidence easily, as well as a way to support cooperation and exchange of information between different jurisdictions. This will facilitate criminal investigations and assure evidence integrity for presentation in a Court.

1. The Crowd Violence Detection tool aims to recognize violent scenes from crowd-centred video footage or visual streams in a (near) real-time (depending on available hardware); the tool can be used in a local installation, ie, without transferring videos online to a remote server.

Volto Labs is a privately owned company in the Netherlands, based at the HSD Campus in The Hague. The company focuses on innovative technology for Cyber ​​HUMINT and SOCMINT activities to improve efficiency, collaboration and compliance for police, investigative, security and intelligence agencies. Former products and projects are Tracks Inspector (digital forensics) and Sweetie 2.0.

AIRA is a solution based on LEAP (visit website). It was developed with and for SA Office Cologne, with the specific goal of quickly and automatically detecting OCSE with AI technology. We’ve developed a Classifier that is trained and constantly re-trained on abstracted data, without real data having to leave the agency. It provides accuracy rates of around 90%, with False Positives around 2-3%. Due to the abstraction, any agency can re-train it. 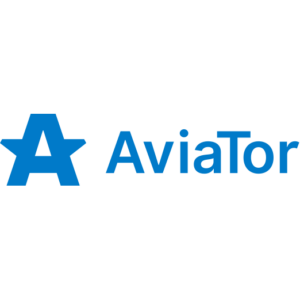 The AviaTor system facilitates Law Enforcement Agencies to deal with the vast number of NCMEC reports in an efficient and effective way. AviaTor combines visual intelligence and targeted online research to improve the intelligence position of the investigator while dealing with these reports. Information from the reports is analyzed, cross-matched and enriched, providing a means to prioritize reports and focus on the most important ones first.

Drones can be used for terrorist activities. The German-Austrian cooperation project AMBOS, funded by Federal Ministry of Education and Research, was designed to develop a system, dedicaetd to Law
Enforcement Agencies (LEA), to defend against drones in defined security areas. To this end, approaching drones were to be detected, their threat potential analyzed and effective defense measures developed.

ENLETS Messenger is a GDPR-compliant communication platform for law enforcement that integrates common messenger features with file storage. You don’t even need a mobile number to sign in as the platform also works perfectly on the desktop version. Users benefit from a clear separation between different communication channels and the protection of their privacy.

unival DroneWall | USG Spectrum Guard is a multi-purpose RF based monitoring system that can be flexibly used in a wide-area of ​​facilities that require not only drone defense but also detection of unwanted communication such as Jammers, IMSI Catchers, through cellphones and need a cost- efficient solution that is future proof and can cover the frequency spectrum up to 30 GHz. DroneWall used a non-jamming IT attack against commercial drones.