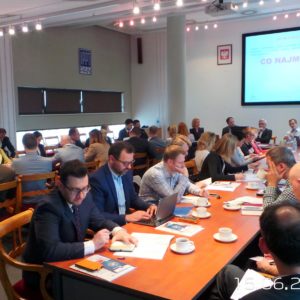 On 15 June 2016, the Polish Platform for Homeland Security and the Polish National Contact Point for Research Programs of the European Union organized an information meeting for representatives of uniformed services that are interested in direct participation in research and development projects financed in the framework of the Horizon 2020 Program. The meeting was held at the Institute of Fundamental Technological of the Polish Academy of Sciences in Warsaw.

The main objective of the meeting was to present information about the procedure of registration in the European Commission’s Participant Portal and obtaining the Participant Identification Code (PIC). Also, the procedure of appointment of the Legal Entity Appointed Representative (LEAR) and its importance at the stage of performance of European projects were discussed.

Of note is the fact that for several years the European Commission has made a significant emphasis on inclusion of representatives of uniformed services in consortia. Thus, it is very important to highlight the presence and activity of Polish agencies responsible for security in the European forum.

During the meeting, the benefits for the uniformed services resulting from involvement in European projects were emphasized. These include:

A very important item on the meeting’s agenda was a discussion and sharing of experiences.

The attendees pointed at the procedure of transfer of funds from the European Commission to uniformed services (government entities). According to the current practice, the funds are transferred to specific agencies through the Ministry of Finances and a special-purpose reserve. During the discussion, the participants pointed at the need to clarify the guidelines and rules for using the special-purpose reserve. The position of the Ministry of Finance on this issue will facilitate planning and using the budget by the agencies that participate or are planning to participate in projects financed by the European Union.

Moreover, during the discussion it turned out that individual local structures of specific agencies (in particular provincial headquarters of the Police) do have their PIC numbers due to their involvement in the past in projects financed by the European Commission. These experiences can be used as good practices for other agencies that intend to register in the Participant Portal.

Presentations given during the meeting:

A link for registration of an institution in the Participant Portal of the European Commission is available here.