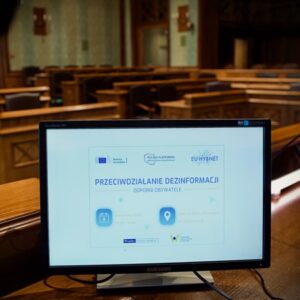 The workshop “Countering Disinformation – Resilient Civilians” was held on the 8th of April 2022 in Wrocław, Poland.

It was organised by the Polish Platform for Homeland Security (PPHS) and the European Commission Representative in Wrocław in cooperation with the EU-HYBNET project, the City Hall in Wrocław and the Wrocław Centre for Social Development.

The event was opened by:

During the event, some of the most prominent national experts discussed what combatting disinformation looks like nowadays and what must be done by Poland and Europe to win this fight.

“This meeting aims to conduct a discussion on disinformation and hybrid threats, along with developing the specific action recommendations at both national and European levels to allow us to implement these ideas in the next months and years. Of course, we must be aware this is only a next and small step in that huge topic”, said PPHS Managing Director Rashel Talukder, during his opening speech.

In the first part of the workshop, Martyna Bildzukiewicz, PhD, the head of the EU East Stratcom Task Force, shared about the EU’s reaction to Russian disinformation targeted against Ukraine and other European countries. Agnieszka Legucka, PhD, a representative of the Polish Institute of International Affairs, described the mechanism of the Russian misinformation, also in the context of the security of Poland. Social and media mechanisms of disinformation were presented by Karona Stasiuk-Krajowska, PhD, from the SWPS University of Social Sciences and Humanities. The three speaker scientists then took part in a discussion moderated by Daniel Rząsa, the PPHS expert on countering disinformation.

The second part of the workshop involved group discussions related to disinformation and media education with the involvement of representatives from law enforcement agencies, NGOs and other institutions. Despite the heterogeneous teams, good practices were developed in the area of countering hybrid threats for the first time in Poland.

Recommendations that were a result of the workshop’s discussions will be gathered by PPHS and passed on to the European Commission, Polish governmental and local institutions and the pan-European EU-HYBNET project aimed at developing the European network to detect and countering hybrid threats.

This workshop was organised under the action “Conference on the Future of Europe”, initiated by the European Commission, which aims to stimulate the broad social debate on recommendations for European policies.

For more information or to get involved in the PPHS’ activities related to fighting against radicalisation, contact Magda Okuniewska at magda.okuniewska@ppbw.pl

Summary of the workshops organised in the World Cafe format [DOWNLOAD]