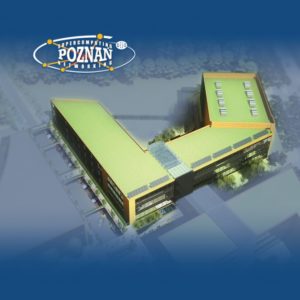 Cornerstone laying for the headquarters of the PSNC

On 18 June 2013, at Jana Pawła II St. in Poznan, in the presence of senior representatives of the Ministry of Regional Development, the Wielkopolskie Province Governor, the Wielkopolskie Province regional government and the Poznan city council, the Archbishop of Poznan, and numerous scientists, the groundbreaking plaque signing and the cornerstone laying ceremony took place at the construction site of the Polish Optical Internet Research Center, which is the headquarters of the Poznan Supercomputing and Networking Center (PSNC).

The Polish Optical Internet Research Center (POIRC) will be a base for research and implementation projects in the area of e-infrastructure, as well as information and communication technologies and their applications.The complex of the POIRC facilities will become the headquarters of the Poznan Supercomputing and Networking Center (PSNC), affiliated to the Institute of Bioogranic Chemistry of the Polish Academy of Sciences which is the operator of the PIONIER national academic fiber optic network, the operator of the POZMAN municipal fiber optic network, the operator of the High Performance Computers Center, and a globally recognized research and development center in the field of information and communication technologies.

The Polish Platform for Homeland Security was represented by Dr Zbigniew Rau.