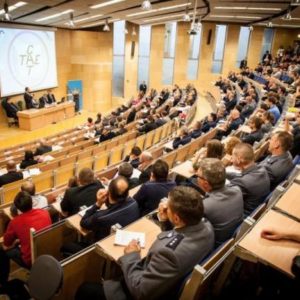 On 22 October 2014, a conference titled “Use of firearms as a means of direct coercion – legal aspects” was held at the Law Faculty of the Silesian Faculty in Katowice. The Polish Platform for Homeland Security, one of the honorary patrons of the conference, was represented by the Platform’s Secretary, Rashel Talukder.

Besides the academic workers of the Faculty of Law and Administration of the Silesian University in Katowice, the participants of the conference included representatives of the Department of Sociology of the Jagiellonian University, of the Opole University, of the University of Bialystok, as well as the Land Force Officer School in Wroclaw, the National Defense Academy, and the Center for Special Training of the Border Guard in Luban. Representatives of the following institutions and agencies also participated in the scientific work: the Police, the Border Guard, the Prison Service, the Internal Security Agency, the Central Anti-Corruption Bureau, commune and municipal police, nature-preservation agencies (State Hunting Guard, Forest Guard), traffic police agencies (Provincial Road Transport Inspectorate, Railway Protection Guard), as well as representatives of the Balice and Pyrzowice international airports. Invaluable support was also provided by representatives of the Appellate Public Prosecutor’s Office in Katowice, the National School of the Judiciary and the Public Prosecutor’s Office in Cracow, the District Courts in Gliwice and Katowice, the IUSTITIA Association of Polish Judges, as well as the Polish Armed Forces (Provincial Military Staff in Katowice and Military Recruitment Office in Katowice).