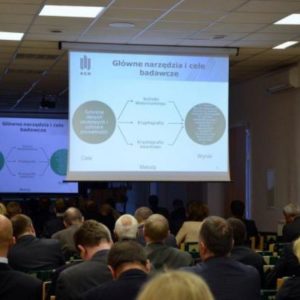 On 4-7 December 2012, in the Polish Academy of Sciences Center in Będlewo near Poznań, took place conference entitled “New directions in internal security research and their practical applications”.

The participants of the conference worked in discussion panels dedicated to specific topics. The main problem addressed during the conference was the use of modern technologies in the criminal process taking into account its technical and legal aspects, as well as the safety of visually impaired persons in road traffic. Also, the discussion of citizens’ rights and freedoms was continued in the context of security research. Its participants were, among others, Dr. Wojciech Rafał Wiewiórski – the General Inspector for Personal Data Protection, Katarzyna Szymielewicz – the Chair of the Board of the Panoptykon Foundation, and representatives of the Helsinki Foundation for Human Rights.

The conference was also an opportunity to present new technologies developed by scientists working in the framework of the Polish Platform for Homeland Security, namely the most recent version of the System for Automatic Speech Recognition (ARM), the Integrated Information and Communication Technology Platform, LINK 2 – a set of applications supporting criminal intelligence analysis; and INACT – a tool supporting the fight against child pornography.

By using this site you agree to the use of cookies files. Personal data protection