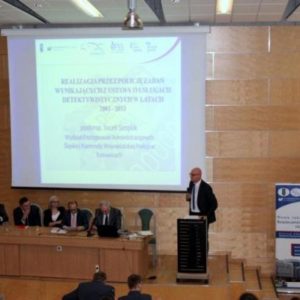 Conference at the University of Silesia

On 13 May 2015, the Faculty of Law and Administration of the Silesian University in Katowice held a scientific conference titled “Privatization of police tasks. Benefits and risks” which was organized in the framework of the project titled “New quality in education – internal security”.

The honorary patrons of the conference were the Human Rights Defender – Professor Irena Lipowicz, the Silesian Province Police Commander – nadinsp. Jaroslaw Szymczyk, the Superintendent of the Police Academy in Katowice – insp. Jaroslaw Kaleta, and the Polish Platform for Homeland Security.

The session was divided into three panels that focused on the problem of privatization in the area of personal and property protection, detective services, and symptoms of privatization of police tasks that take the form of individual citizens’ right of self-defense (reasonable force) and self-protection (the right to own firearms). One of the topics discussed during the conference was the issue of participation of local communities in ensuring security and the problem of legal aspects of preventive monitoring of public space.

The conference was attended scientists, the Human Rights Defender, representatives of courts, the Police, nature protection agencies and transport security agencies, the military, as well as businesses offering detective services and personal and property protection services.

The Polish Platform for Homeland Security was represented by its Secretary, Rashel Talukder.