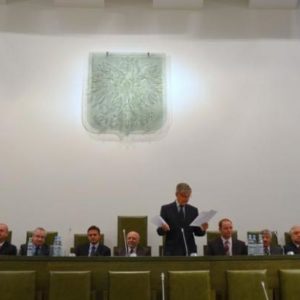 Conference at the Supreme Court entitled “Modern technologies in the criminal process and detection activities vs. citizens’ rights and freedoms”

On 20 September 2012 in the building of the Supreme Court conference entitled “Modern technologies in the criminal process and detection activities vs. citizens’ rights and freedoms” was organized by the Supreme Court, the Polish Platform for Homeland Security, and – for the first time this year – the Helsinki Foundation for Human Rights. The honorary patronage of the conference was assumed by Stanislaw Dabrowski, First President of the Supreme Court, who also participated in the deliberations.

The participants included judges; prosecutors; officers of the National Police Headquarters, the Central Anticorruption Bureau, the Internal Security Agency, the Border Guard, the Customs Service, the Military Police, and other military units; representatives of central government and regional/local government bodies, scientific circles, non-governmental organizations and the industry who are actively involved in the implementation of the results of the research conducted by Polish scientists.

A very important topic discussed during the conference was the issue of guarantees of citizens’ rights and freedoms in the context of modern technological solutions used by services in charge of security of the state and its citizens.

The discussion is needed also because of the requests filed with the Constitutional Tribunal concerning a precise definition of the scope of use of operational techniques and the confidential use of telecommunication data.

Another important topic discussed during the conference was definition of the research areas in the fields of law and technology pertaining to internal security that should be included in the future Strategic Programs financed by the National Center for Research and Development.

Given the fast informatization of the judiciary, in particular in the area of civil law, new possibilities of automatic transcription of speech into written text and the Intelligent Court File Search Engine (InWas) were presented.

The results of the discussion conducted during the Conference will contribute to both determination of the future directions of research in the area of internal security and elaboration of appropriate laws that will enable proper use by various services of the technologies to be developed, in particular as a part of their operational techniques.

The guests of the conference included: