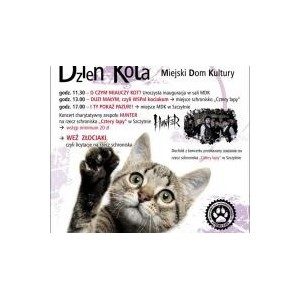 Celebration of the International Cat Day – help for homeless animals

The idea to help the animals first came to the Szczytno’s youth: the students of the secondary schools and the cadets of the Police Academy. The volunteers collect animal feed and other things for the animals, in particular the cats and the dogs living in Szczytno’s “Four Paws” animal shelter.

The event is co-organized by the Police Academy, the Municipal Office, and the Polish Platform for Homeland Security. The campaign is taking place between 20 January and 17 February 2013 and is targeted at persons who are not indifferent to the good of the animals living in the Szczytno’s shelter.

Posters with information on the campaign and the points where gifts for the animals are to be connected are placed at the Academy, at the secondary schools, and in various locations in Szczytno. In addition to the conducting the “feed bank” collection, the volunteers will inform the public about the opportunities and rules for becoming involved in voluntary work at the animal shelter (the key work to be performed is cleaning the cubicles, feeding the animals, portioning of the feed, etc.).

On 17 February, which is the International Cat Day, the volunteers will hand over the gifts they collected to the “Four Paws” animal shelter in Szczytno. This date is an opportunity to close the campaign.

In the Municipal Culture House in Szczytno, young people will make performances in support of helping the animals. During the break in the performances, the gifts will be officially handed over at the animal shelter by the volunteers and the PaT youth theater group.

The second part of the program comprises a concert of the HUNTER band from Szczytno, which supports the idea of helping animals.

The items to be sold at the auction include paintings made by representatives of the Polish Platform for Homeland Security at the Ventzi Gallery under the supervision of the Master, Ventislav Piriankov. The leitmotif of the paintings, painted with acrylic paint, is cats.

The video of the HUNTER band recorded at the animal shelter in Szczytno you can see here.