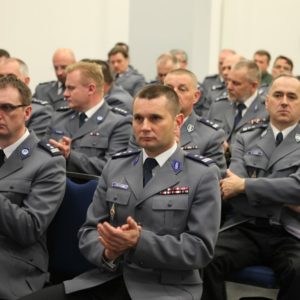 On 27 April 2016, during the Securex exhibition, the 1st Local Communities Security Forum was organized in Poznan. The conference was attended by representatives of the Police, science, state administration, the judiciary, various government agencies, and non-governmental organizations. The conference focused on terrorism and broadly defined security.

The theme of the meeting was “Countering serious threats to residents of Poland, functioning of administration, and key enterprises”.

The conference was organized by: The Provincial Commander of the Police in Poznan insp. Tomasz Trawinski, Rector of the Poznan School of Social Sciences prof. dr hab. Michal Iwaszkiewicz, host of the Poznan International Fair and the Securex exhibition Przemyslaw Trawa, and Secretary of the Polish Platform for Homeland Security Rashel Talukder.

The forum is an event focused on increasing the awareness of and interest in areas related to broadly defined security. One such area, which was the main topic of the 1st Forum was sudden, violent terrorist attacks that constitute serious threats to citizens and important public buildings. The meeting was attended by representatives of entities that operate strategic public buildings and facilities, the regional government of the Wielkopolskie Province, the academia, the government administration, the judiciary, various government agencies, and non-governmental organizations.

The Forum was opened by Andrzej Lewinski, the Deputy Inspector General for Personal Data Protection, who emphasized the importance of such initiatives. Various aspects of the threat of terrorism were discussed by, among others, prof. dr hab. inż. Tomasz Lodygowski, the Rector of the Poznan University of Technology, who described the rules of passive house construction, and prof. dr hab. Sebastian Wojciechowski from the Institute for Western Affairs and the Adam Mickiewicz University, who discussed selected contemporary aspects of terrorism in Poland. Dr Maciej Miloston of PCSC focused on IT networks security and prof. dr hab. Andrzej Urban emphasized the importance of appropriate spatial planning and arrangement of public buildings and vegetation in the context of security. The role of local and regional government in operation of critical infrastructure facilities was discussed by Krzysztof Brzozowski, a representative of the Government Security Center. Insp. Tomasz Trawinski, the Provincial Police Commander in Poznan pointed at the interdisciplinary and interinstitutional nature of preventive work of the Police related to terrorism. He also indicated that the coincidence between the 1st Local Communities Security Forum and the Securex exhibition made it possible to share knowledge and led to the development of many practical solutions. Dr Rafal Batkowski, on the other hand, emphasized the importance of the educational function of the Forum and expressed his hope that it would be continued.